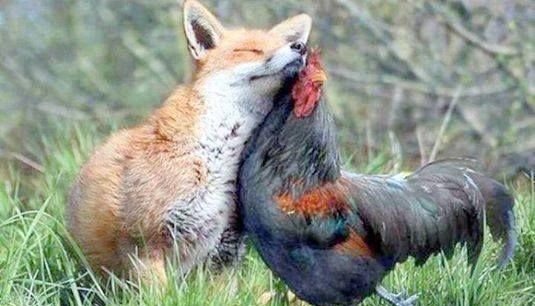 Scientists have found that Chickens are smarter than we give them credit for
As it seems, the average domestic Chicken is quite aware of its surroundings and what goes on in the world. They can learn, communicate, and even feel compassion towards other Chickens.

An article by Lori Moreno ” Thinking Chickens: a review of cognition, emotion, and behavior in the domestic Chicken” talks about Chickens and their amazing abilities in relation to the size of their brains. They show individual personality, trick each other, communicate with each other, and can even come to logical conclusions that some kids only master at about 7 years old.

I am not talking about some super genetically enhanced breed here, I am talking little Red Hen. Standard, happy little egg laying machine following you around in the yard trying to peck the polka dots of your rubber boots (at least that's what they do in my yard).

The domestic Chicken is the descendant of a southeast Asian Chicken breed, the Bankiva, or better known as Jungle Fowl. No other domestic species of animal is quite as common or larger in numbers and variety around the world, at an estimated 19 billion total. Of course, that is largely due to the fact that roughly over 25 Million Chickens are killed each day.

Compassion and Self control

Most of those Chickens never see the light of day during their entire lifetime. Yet some recent studies show that Chickens are way more capable of emotion and intelligence than previously believed. Which begs the question – how cruel are those industrial sized Chicken Houses really? 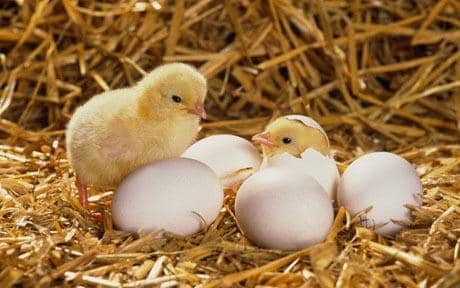 According to a study by Italian scientists baby chicks can actually count: the newly hatched fluffballs are capable to differentiate between a large amount of plastic eggs vs. a smaller amount. When counting, the little chicks follow the exact same procedure humans do – they start from left to right. How would a scientist even be able to tell if a chick is counting you ask? According to the research, scientists showed baby chicks a varied number of eggs, one pile with more and one with less eggs, and then hid them behind two objects. The chicks would always go to the object behind which the larger amount of eggs was hidden, no matter if the pile was to the left or to the right.

Additionally, Chickens can remember the flight path of a ball for up to 3 minutes – which relates closely to the ability of most primates given the same test. In the case of my Chickens, this relates to how fast they can make it down our front field to chase the spaghetti noodle I just tossed, without forgetting where it landed.
A Chicken can also display a certain amount of self-control, explains Marino in her study. It is able to keep its mouth shut for better food instead of immediately starting to eat. (Ha! I can certainly attest to that. My feathered brats continuously will just eyeball the pellets I just threw them while patiently waiting to see if I might drop a piece of my sandwich or coffee cake in the mornings). Each Chicken also knows its rank in the pecking order – both abilities show a certain degree of self-consciousness.
It also appears that communication between and among a flock of Chickens is more complex than widely assumed. Besides the 24 different sounds they can make they also display a wide repertoire of visual signs. Supposedly they are able to watch and become aware of time intervals, concluding a future event. They observe each other, learn from each other and are imprinted mostly by the behavior of their mother hen – just like other, much more intelligent species.

Playing tricks and faking it
Chickens even have their own sense of compassion: when mother hens were shown that a gust of wind ruffled their 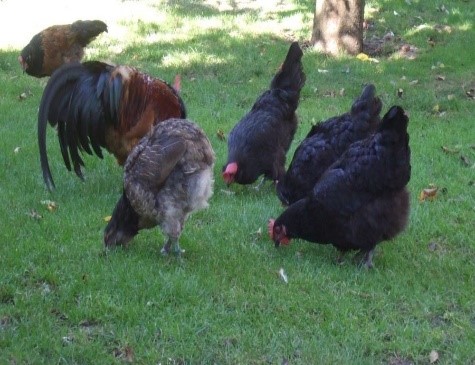 baby chicks feathers and got them upset, the hens displayed the exact same signs of stress as their scared youngsters. This mirrored emotional reaction had only been observed in much more intelligent bird species like ravens, or some primates. (Well, I could have told them that – have you ever seen a mother hen react if you accidentally scare one of her chicks?)
Scientists were amazed when they discovered the Chickens ability to trick others: subordinate roosters would lure hens over by acting just as if they had found food, yet dropping the usual „bock bock bock” calls entirely, so that the Alpha Rooster would not become aware of what’s going on.

And the moral of the story? Don’t underestimate the little birdbrains, even if they are only the size of a walnut. You never know if one might start reciting the alphabet in Morse code one day.